Huge thanks to all the contributors to the InFinnity Project over the last two, especially difficult, years.

As ever the judging has been challenging with so many powerful interpretations of the themes.

The final selection below will be sold in packs of six available shortly on clarkcards.co.uk

Selected under the Electricity Theme is Pylons by Aimee Emerson

Comments from the judges include:

“The simple depictions and how these geometric structures appear almost familial, like characters in a book… simple, direct and full of character.”
Clearly Aimee has observed the variety of pylons closely rendering them disappasionately as though they were insects pinned in a display cabinet.”

Selected under the Light theme is Forest Light by Lauren Foster 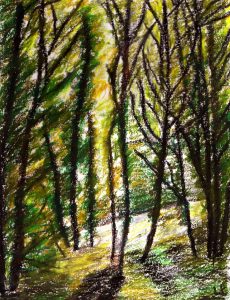 “The overall effect of blurred light passing through the trees is really mesmerising.  The vibrant naturalism express a calm appreciation of the woodland.”
“The colour palette and choice of greens, yellow and brown is spot on, impressive still is the clever use of the white of the paper itself to infer the light coming through the dense foliage.”
Selected under the Summits theme is Mountain Rainbow by Madeleine Pickett

Comments by the judges:

“Madeleine’s textured painting of a rainbow above a mountain summit is immediately striking.  The brightly coloured rainbow artfully accentuates the peak of the mountain at its summit.
“A towering mountain and an ephemeral rainbow is perhaps a curious juxtaposition, but solidity of the former and the sheer vibrancy of the latter are irresistibly combined.”
Thank you to all who have contributed work – it was especially difficult to keep it to only three cards as the Judges’ selections varied widely.   The 2022 theme will be announced in February!